blaktina
Posted by Unknown at 9:02 AM No comments:

Please join me! Everything you can find here, you'll find there, too. And more and better! ;-) 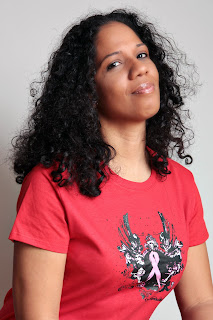 Posted by Unknown at 8:19 PM No comments:

I have been experiencing street harassment since I was about 11 years old. As I walked down the street, grown men would make comments about my appearance, ranging from the mild to the crass. Sometimes it was annoying, often times it was frightening. While I was taught such things as to never accept a drink I had not seen poured and to stand up for myself if someone insulted me, no one ever showed me how to deal with unwanted "compliments" that left me feeling violated rather than appreciated.

As I experimented with ways to respond to such unwanted interactions, it was painful to learn that there was no such thing as the correct response. Whether I ignored the comments, challenged them or even attempted to educate with loving intent to the harasser on why his behavior was unwelcomed, I took a big risk in escalating this situation instigated by the simple act of being a woman who dared deigned to enter public space. Nothing I did or failed to do was going to prevent it from happening or ensuring that the encounter remained verbal.  Neither my peace of mind nor safety was in my hands. For all the excuses that people make for street harassment, the simple fact a person can be forced into an undesired interaction with no other option than to bear it is evidence of a power imbalance. The person who is targeted by the harasser has no true recourse.  She's damned if she does, damned if she doesn't.

The only thing that seems to work is collective intervention. That is, when others - men and women alike - rally around the person who is being targeted and communicates to the perpetrator that they won't abide by that behavior. Unfortunately, we are so fearful of becoming targets ourselves, such an intervention is not as common as it should be.

I remain haunted by past experiences of street harassment. As much as I understand intellectually that nothing I could've done would've sufficed, internalized sexism has a tight grip on the spirit. And so oes internalized racism for one of the most haunting experiences of negotiating the politics of the pavement involved the time I wasn't harassed.

Here is that story and what I learned from it.

Synopsis:   A rape survivor and her prosecutor go after the men who cheered on the assault.

Moment: Prosecutor Kathryn Murphy apologizes to Sarah Tobias for cutting a plea deal and offers her a chance to tell her story.

Rationale:
Based loosely on the story of Cheryl Araujo, The Accused was arguably the first Hollywood picture to deal honestly with the way rape survivors are victimized by the criminal justice system.  As such it has several obvious feminist moments.

I selected this one because it isn’t obvious.  The film does a good job of showing the multiple ways in which classism throws a kink in the wheels of justice, and one way is by delineating the class differences between survivor Sarah and prosecutor Kathryn. At the start of the film, Kathryn is an ambitious by-the-book attorney for the state and agrees to a plea deal without consulting Sara because she has brought into the notion that Sara – a working-class woman with a criminal history who was drunk and high at the time of the assault – wouldn’t make a sympathetic enough victim.  After Sara confronts Kathryn for selling her out, Kathryn seeks another way to achieve justice for Sara.

So this is what I appreciate about this less-than-obvious feminist moment.  Here is a woman of privilege – socio-economic privilege – who not only admits that she was wrong, she finds a way to make it right. In a great scene before this one, after having her change of consciousness, Kathryn takes on the men in her office. For her to go from aligning herself with the patriarchal system that failed Sarah to vowing to expose the district attorney’s corruption if they stop her from prosecuting the men who cheered rather than stopped the rape for criminal solicitation is one of the film’s obvious feminist moments.

But for Kathryn to go to Sara and apologize to her is also a feminist moment. It’s a good cinematic example of allyship -- using one’s privilege to do the right thing even at risk to one’s immediate self-interest. It’s also a depiction of the power of sincere apology and corrective action.  Kathryn could’ve been incredibly righteous about finally doing the right thing, but she didn’t go there. She comes humble and doesn’t expect Sarah to give her cookies for doing the right thing. And that personal gesture – and the spirit behind it – is just as important as her political one.
Posted by Unknown at 5:23 PM No comments:

Written and Directed by Matthew Bright

Moment: Vanessa gets the upper hand on her would-be rapist.

To hell with waiting on some woodsman! Finally a version of Little Red Riding Hood where she fights back against the big bad wolf and prevails! Vanessa is on her way to her grandmother’s house when she hitches a ride with Bob who unbeknownst to her is the Freeway Killer. He gains her trust, makes her reveals intimate details of her life and then turns on her. But homegirl’s not going out like that. There’s another great scene later where Vanessa revels in how she whooped that rapist ass, but you’re going to have to get your hands on the flick to see that. If you like your humor dark and your fairy tales edgy, you’ll enjoy this flick.

Today's Reese Witherspoon's birthday. Happy birthday, Reese. Thank you for all the Feminist Film Moments. If you look at her career, there's quite a few of 'em.

Written and Directed by Darnell Martin

Synopsis:   When her husband gets arrested, stay-at-home mother Lisette finds a job – and a new sense of herself – that shakes up her family.

Moment: Chino defies his homeboys when they urge him to hit his wife.

I’m undecided as to whether or not an ultimate goal of feminism should be to eradicate all gender constructions such as femininity and masculinity. I’m pretty confident, however, that part of the feminist enterprise is to recreate masculinities that are not predicated on patriarchal pillars. One such pillar is violence, and that brings me to today’s Feminist Film Moment. When Chino suspects that his wife Lisette cheated on him with her boss, his boys are quick to suggest that he regulate her with a public beating.  Chino’s flawed, no question, but he doesn’t get down like that.  The fact that he resists the pressure to hit his wife at all – never mind in front of crowd of men that believes she has it coming – is a profound act of resistance.  And given the dangerously pervasive myth that Latino and working-class men are somehow more violent than those of other socioeconomic backgrounds, this moment is full of intersectional win. Daps to writer and director Darnell Martin creating this image and one of my mentors Lillian Jimenez for pointing it out to me.

Oh, and on another note, nice to see a movie where the gossips are men because, you know, they're not beyond it. They just call it networking or some shit like that.

Email ThisBlogThis!Share to TwitterShare to FacebookShare to Pinterest
Labels: darnell martin, domestic violence, feminist film moments, i like it like that, jon seda, lauren velez, masculinity

Synopsis:   Big leaves Carrie at the altar, but enough about those two…

Moment: Samantha breaks up with Smith.

We can debate the overall feminist bona fides of Sex and the City. I liked the show but was no stan ‘cause I could relate to this popular foursome just so much. (Fans will say that the women on this show talk about sex and relationships like real women. Meh. My contention is that Carrie, Miranda, Charlotte and Samantha speak the way wealthy White gay men think straight White women who aspire to affluence speak.) That said, the movie, and the show aren’t without moments that make me say, “Yaaas!”

This is one of those moments.  Let me break down why Samantha’s break up with Smith is no little thing. Bad enough women are socialized to feel inadequate if they don’t have romantic partners, those of a middle age are particularly vulnerable to negative messages about their waning desirability. It’s the reason why they’re at once pressured to become cougars and then ridiculed if they actually succeed in sleeping with or even forging substantive emotional connections to younger men. (The many layers of fuckedupedness shrouding the term cougar is a post in its own right although I’m sure some other feminists have nailed it already.) According to these pressures, Samantha must be dysfunctional to not be happy with Smith.

But unhappy she was. Enough that she had to go. And Samantha leaves the relationship with no guarantee of what she will find. All she has is faith that who she is in her own right – that is, independent of her relationship status – will make prove the decision wise. That’s a powerful message for all people but especially women who are constantly told that being with the wrong man is better than having no man at all (shout out to the heterosexist assumption, too.)

The fact that Samantha is almost fifty when she chooses to break it off with a man who’s deemed highly desirable (on both meaningful and superficial criteria) instead of settling for less than fulfillment and sparring with women half her age to protect what’s “hers” makes it that more potent.